I’ve recently started working with Azure’s application insights and I’m really having fun with it. When I first started, I noticed that under the sources that there is something that reads as fx functions. 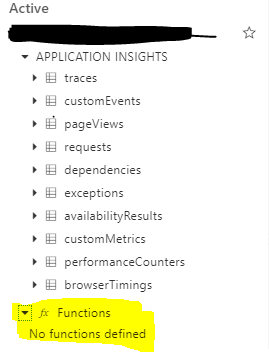 Very recently I realized that the fx is actually an icon.

I thought this would be great as one could enhance the default query language with functions that are aligned with the organization’s deployment language. These functions could be shared to help reduce the size of the queries while keeping everything cleaner. But, I first needed to master kusto, so I focused on building up big queries.

Where is the save option?

Once I learned enough, I’ve decided it was time to break my big queries into smaller chunks that would also single source common functionality. I couldn’t find how and as much as I searched online and read the documentation, I couldn’t find any useful leads. So, I raised a question on stackoverflow.

It seems that my organization was blocking this through authorization and if that is the case with you, I hope this post offers you the leads to help you navigate the waters. I had a suspicion that this was the case, because I couldn’t create a shared query as well.

When you press Save, then the following form appears 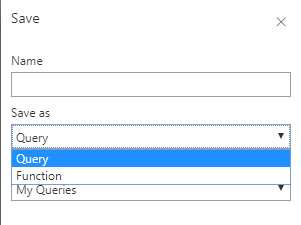 Without the Application Insights Component Contributor role, the Function option in the Save as drop-down is missing. After saving the function, it will show up both as a shared query with fx icon and under the functions as well.

You are allowed to have both a shared query and a function with the same name (e.g. test) but it is not advised because when trying to update the function an error is thrown.

The name in the form is how the function shows as a shared query on the right and the alias is how it shows withing the functions on the left.

The alias is also the reference artefact in the queries, similar to e.g. requests, dependencies etc. For example, the following kusto query would execute the test` function:

To edit/update the function, just do what you would to edit/update a query. After pressing Save just select the same type, name and alias.

To delete a function you effectively delete an entry from the shared queries. Problem is that there you select based on the name and not the alias.

What is really a function?

A function is the same as a query with the only difference being that it shows up on the left and can be referenced by other queries. You can’t save a function for example like this

Instead a function would contain both and create a new dataset by extending the union of requests and dependencies.

This means that a function is more like a source like requests,dependencies etc are. If you would compare this with SQL, then a function in logs analytics is more like a view which combines and extends the data sets from the other sources.

I believe that documentation for this particular topic can greatly be improved.

Upgrade from Pester v4 to v5

Upgrading Pester from version 4 to 5 is not easy. Many things are broken and this post is about discussing what to expect and what to do.

Tips and tricks for PlantUML

Enhance PowerShell tracing and logging for the console and transcriptions

PowerShell tracing capabilities are very much lacking. XWrite offers the means to enrich the output of each line with tokens such as the invoker’s type, invo...